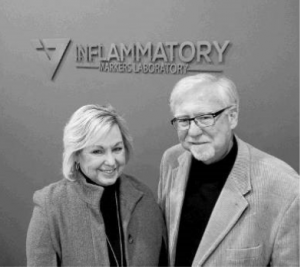 We were recently featured in the Wichita Eagle Newspaper. Check out the article!

Wichita couple builds a business around testing for chronic inflammation

BY THE WICHITA EAGLE

A Wichita couple hopes that the current interest in chronic inflammation gets as many people as possible to try their test for it.

“They say 98 percent of all diseases are developed from chronic inflammation – heart disease, cancer, diabetes, truly everything,” said Chris Ens, who owns Inflammatory Markers Laboratory with her husband, Gordon Ens.

The Ens opened the business last year to market a test that measures a substance called thromboxane metabolite — an indicator of chronic inflammation — in a person’s urine.

Regulations vary by state, but most U.S. residents can order the test themselves and have it sent directly to them. It works like the urine tests most people have taken in a doctor’s office or laboratory. Test results are mailed to clients within two weeks of the sample being turned in, and a copy of the results can be mailed to a client’s medical practitioner.

“We suggest that everybody do a baseline test to see what their score is,” Chris Ens said. “That score is compared to hundreds and thousands of other patients. They’ll see how they fall on the grid.”

Armed with that information, clients may want to try one of the dietary, medical or physical strategies for reducing chronic inflammation. Periodic retesting can help them see what’s working, or not.

The cost is $87. The Ens hope to expand their business to Canada soon. The company now employs six people, including the Ens, and operates in about 2,500 square feet.

Chris Ens said the only other test for chronic inflammation requires drawing blood. “Obviously, a blood test means you have to go into a doctor’s office or lab, and that makes it more difficult.”

Consumers can order the test themselves, but Ens said most sales come from medical practitioners recommending it.

The laboratory also helps other companies test products “from probiotics to fish oil” that are touted as cures for inflammation.

And it is working with a veterinarian on the possibility of using the test for cats, dogs, horses and other animals.

In humans, Alzheimer’s, dementia, digestive disorders and migraines are some of the health disorders thought to be caused by chronic inflammation. Ens cited a recent book and network news segment on the possible link of brain inflammation to depression and said that at a recent medical trade show she attended in Las Vegas, “every single one of the topics … was on chronic inflammation.”

Gordon Ens has spent his career in clinical laboratory medicine, starting a company called Colorado Coagulation Consultants in Denver in 1975 and later selling it. He later got FDA approval for a urine test called Aspirin-Works that monitors aspirin’s effects. Realizing that chronic inflammation often causes aspirin therapy to fail, Ens expanded its use to become a “biomarker” for that condition.

Chris Ens has worked as a consultant in the hotel and hospitality industry.

The couple moved to Wichita 15 years ago to be near their grandchildren. The plan, Chris said, was to “retire and hit the beach many years ago.”

Instead, a couple of friends and behind-the-scenes investors helped persuade them to start another business, with “chronic inflammation as the buzzword.”

“They said, ‘Let’s start it in Wichita and serve the world. Before we knew it, we had a laboratory.”

Take Control of Your Health

Discover why this test is a valuable aid in measuring response to therapy in order to manage risk associated with the chronic inflammatory process.

Signup to receive the latest news, events and special promos!